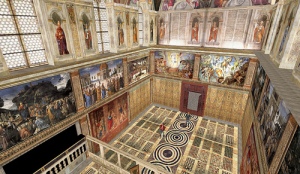 Inside the Sistine Chapel

UPDATE
March 23, 2013 5:30 PM ET
A new pope has been elected, Jorge Mario Bergoglio, will be called Francis, the 266th pontiff of the Roman Catholic Church. Source: the New York Times.

It’s gotta be tough whenever a Pope dies.  But can you imagine what it’s like for this College of Cardinals given the recent Pope’s resignation and the bad ink about the Catholic Church?   And the news just got a touch worse today, when the papal conclave opened the papers with their morning cappuccinos only to see the headline, “Vatican Owns the Building that Houses Europe’s Biggest Gay Bathhouse.”  That’s a no-no.  And to add fuel to the fire, Cardinal Dias lives one floor above the rockin’ club in a swanky 12-room apartment. END_OF_DOCUMENT_TOKEN_TO_BE_REPLACED

We provide the insight and perspectives on today's news to help relate it to the ever-changing world of PR. With a staff full of expertise in areas from production to social media, everyone at zcomm contributes! For more info on our staff, visit our website. We love comments so leave us a message to let us know what you think! We also accept submissions for guest blogs so send your posts our way!